Solar panels sit in the elements for decades, dealing with whatever nature has to offer.

Despite the challenges of being outside all the time, many panels come with 25-year warranties, and manufacturers say the equipment is capable of operating at a high level for 30, 40 or even more years into the future.

When I see numbers like this, I get skeptical. Solar panels are made of silicon, a material that cracks easily, and their main protection is a thin sheet of tempered glass.

To understand why panel makers can confidently offer decades-long guarantees, I spoke this week with Laura Schelhas of the National Renewable Energy Laboratory in Golden, Colorado. She is a chemist and one of the leaders of a research project spanning several national labs and solar panel manufacturers that works to understand why panels sometimes fail, and how to make them last longer.

What got my attention about her project, called the Durable Materials Consortium, or DuraMAT, was a video put out by the lab that shows scientists doing their best to break solar panels, including jumping on them, walking on them and twisting brittle sheets of silicon until they shatter.

She explained that this hands-on breaking of stuff was not a typical day at the office. Her team’s research has more to do with using modeling methods to come up with ways to simulate decades of weather exposure in much shorter periods of time. The testing often takes place in controlled chambers where researchers set conditions of heat, cold and moisture, and use of mechanical instruments to poke and shake the panels.

Panels can fail for many reasons, including corrosion of the metal that connects the parts, and accumulation of cracks in silicon, the material that absorbs sunlight.

Here is our interview, edited for length and clarity:

If you were at a backyard barbecue, and you were explaining what this program does, what would you say?

I would say that the main goal of the program is to ensure that solar panels—we call them solar modules—can last for a really long time. What we’re really pushing to do is make sure that when you buy a solar module it can last 30 years, even up to 50 years. So we’re making sure that all of the stuff that goes into the super complicated package can last. And so it’s really trying to understand why things fall apart, and what we can do to kind of prevent that from happening. 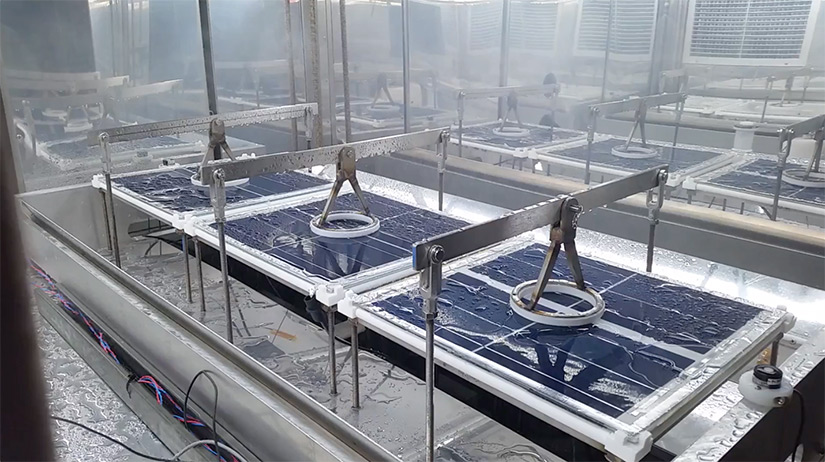 A screenshot from a video by a National Renewable Energy Laboratory researcher shows one of the solar panel testing chambers in the lab. The rings press down on the panels to provide mechanical stress, while the chamber can subject the panels to stress from water, heat coal, electricity and UV light. Credit: NREL

I would imagine that there’s probably a mix of long-term research and then some more hands-on work.

We have aspects of what we do that is in data and data handling data analytics. And then we have research in modeling, asking questions like, ’Can we use models to understand failure and even predict the lifetime of materials?’ That predicting is really, really hard, and something that we’re starting to focus on a lot.

One thing that gets my attention is this idea of panels being made so durable that  they can potentially last 50 years. Considering that new panels are getting more efficient with each passing year, why would anyone want the same panels for 50 years? Wouldn’t it make sense to replace them sooner than that?‘

Is the durability of solar panels improving enough to deal with the increases we’re seeing in harsh weather and extreme heat?

You see definite improvements, but new questions are always arriving. One of the trends in the industry is a transition from a glass front and a polymer back sheet material to a glass front and glass back. And part of the reason for that is, modules are changing from monofacial configuration to what they call bifacial. In monofacial, you’ve just got light from the front. And so it didn’t matter what was on the back. But in bifacial cells, you’re collecting light also on the back of the cell, to boost efficiencies. To do that, the light has to get through. There is the possibility for a transparent polymer backing material, but the easiest thing to do is just put glass on the back. Once you do that, now, you potentially introduce new degradation mechanisms and modes that we haven’t seen before. And there’s a lot of work going into exploring that. Those are kinds of interesting questions that we’ll continue to explore over the next few years.

What do you think is a good number to use when talking about the typical lifespan of the solar panel? Is it the warranty from manufacturers?

I think realistically, modules can last for 30 years. That’s all with the caveat that manufacturing processes are controlled well, and you’re getting a quality product.

Other stories about the energy transition to take note of this week:

To Ease Fossil-Fuel Reliance, a Start-Up Plans to Dig the Deepest Holes on Earth: Quaise Energy, a spinoff of a project at the Massachusetts Institute of Technology, is building a business that would drill up to 12 miles into the earth to tap vast resources of geothermal energy. The company would be able to go that deep by using a laser capable of getting through granite and basalt, as David Abel reports for The Boston Globe. The deep holes would act as a conduit for steam to rise to the surface where it would turn a turbine to produce electricity. “By drilling deeper, hotter, and faster than ever before possible, Quaise aspires to provide abundant and reliable clean energy for all humanity,” said Carlos Araque, a co-founder.

Hydrogen Could Be Part of the Answer for Clean Energy—or Gas Industry Greenwashing: SoCal Gas is proposing the build what it says would be the country’s largest “green hydrogen” energy system, part of the gas industry’s push to develop new assets that they say could be an essential part of the transition away from fossil fuels. But environmentalists have long viewed the gas industry’s embrace of hydrogen as more greenwashing than a workable solution for replacing natural gas, as Sammy Roth reports for The Los Angeles Times. Los Angeles officials are not sure what to make of green hydrogen, which is created by using renewable energy to make hydrogen.  “Anybody who says green hydrogen is going to work for sure doesn’t yet know what they’re talking about,” said Los Angeles Mayor Eric Garcetti. “Anybody who says green hydrogen won’t work for sure doesn’t know what they’re talking about.”

Illinois Coal-Fired Plants Cranked up Emission-Spewing Production Last Year: Illinois passed a landmark clean energy law in 2021, which will force the closing of most of the state’s coal-fired power plants by 2030. Also in 2021, Illinois coal-fired plants increased their electricity output by 39 percent, the largest percentage increase of any of the country’s top 10 coal-burning states, as Brett Chase of the Chicago Sun-Times and I reported last week. The increasing use of Illinois coal plants was because of several factors, including the rebound from low electricity demand in 2020 due to pandemic lockdowns, and the rise in natural gas prices in 2021. Whatever the reason, the spike in coal-fired electricity, and the accompanying rise in emissions, is bad for the climate and human health. It also shows some of what the clean energy law is fighting against, which is that market forces sometimes lead to increases in demand for coal-fired electricity, even if that’s not good for the public.

What Happens to Used Solar Panels? The Department of Energy Wants to Know: The Department of Energy has released an action plan to help the United States put together a system for recycling solar panels. The department’s Solar Energy Technologies Office announced a new target to get the costs of recycling solar panels down to about $3 per panel by 2030, which the office said would make the practice economically viable for the first time, as David Iaconangelo reports for E&E News.

Inside Clean Energy is ICN’s weekly bulletin of news and analysis about the energy transition. Send news tips and questions to dan.gearino@insideclimatenews.org.

I recommend you do.